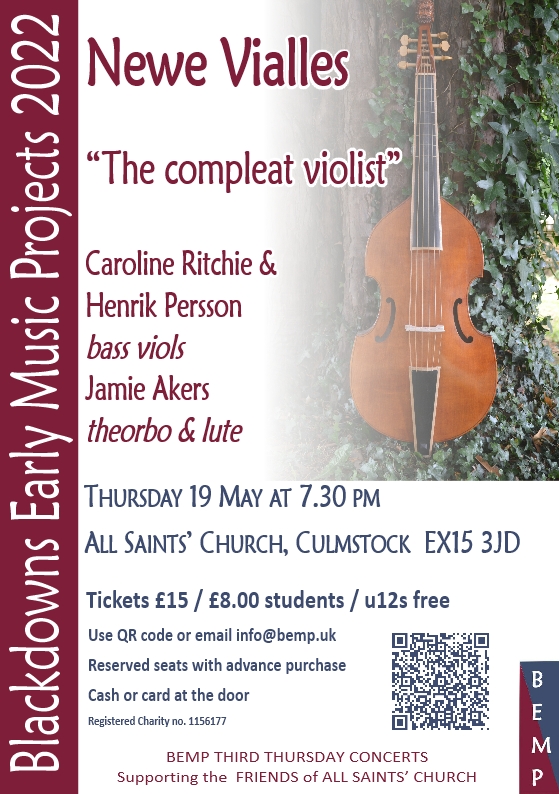 10% discount available when purchasing tickets for three or more Third Thursday events at the same time
“The compleat violist”
Henrik Persson and Caroline Ritchie: bass viols
Jamie Akers: theorbo and guitar
The music collection of an imaginary viol player, living in London at the turn of the eighteenth century. Performed on two original bass viols built in 1675 and 1703 respectively, this programme explores the repertoire that might have been played by their first owners. The beautiful decorations on each viol point to people of artistic taste and sensibility, with money to spend – possibly educated on a European “grand tour”, or frequenters of London book and music dealers. What would they have played? Music by English viol players such as Christopher Simpson, Playford’s dance tunes, pieces by immigrant composers working in London…perhaps they even had a copy of Marais’ first book, or tried their hand at a Corelli sonata or two?
The programme features music by Christopher Simpson, John Jenkins, Gottfried Finger, Johann Schenck, Marin Marais, and Arcangelo Corelli.

Caroline is a performer on all sizes of viol, medieval fiddle, lirone, and early cello. Her concert and recording career spans a broad spectrum of music, from the mid-15th to the 18th centuries and beyond. She can be heard in all major festivals and concert series throughout Europe, and also plays regularly in Canada.  A passionate teacher and repertoire coach, from 2007-2019 she taught viol and consort playing at the Royal Academy of Music in London, and now from her home in Basel. With Henrik Persson, she co-founded the South West Viols Festival in Culmstock, Devon.

Henrik Persson was born in Stockholm in 1976. He developed an interest in period instrument performance while at the Birmingham Conservatoire and this led to a postgraduate degree at the Royal Academy of Music from which he graduated in 2002. During his time at the Academy, he studied baroque and classical cello with Jennifer Ward-Clarke and viola da gamba with Richard Campbell. He works with leading period instrument orchestras such as The Orchestra of the Age of Enlightenment, The Gabrieli Consort, The Academy of Ancient Music, The New Dutch Academy (the Netherlands) and L’Orfeo Barock Orkester (Austria) and is in constant demand as a chamber musician, having performed with the Chamber Soloists of the Irish Baroque Orchestra, Ensemble Shudi, The Musical and Amicable Society and Musica Viva.

Jamie Akers is appearing in this series for the first time.  He was born in Scotland and began playing guitar at the age of 10. Initially playing rock and blues then attempting to play jazz and finally settling on the classical guitar, he was largely self-taught before having lessons with Robert Mackillop at Napier University, Edinburgh. While there he turned his attentions to playing the lute and pursued this as his principle study at the Royal College of Music, with Jakob Lindberg. Having added the theorbo to his expanding instrument collection, Jamie completed his studies at Trinity College of Music, studying with Jacob Heringman and David Miller, with additional lessons and advice from Paul O’Dette and Elizabeth Kenny. Settled on the period instrument path, Jamie continued accumulating instruments and exploring the music of the 16th to 19th centuries, with occasional forays into contemporary music.