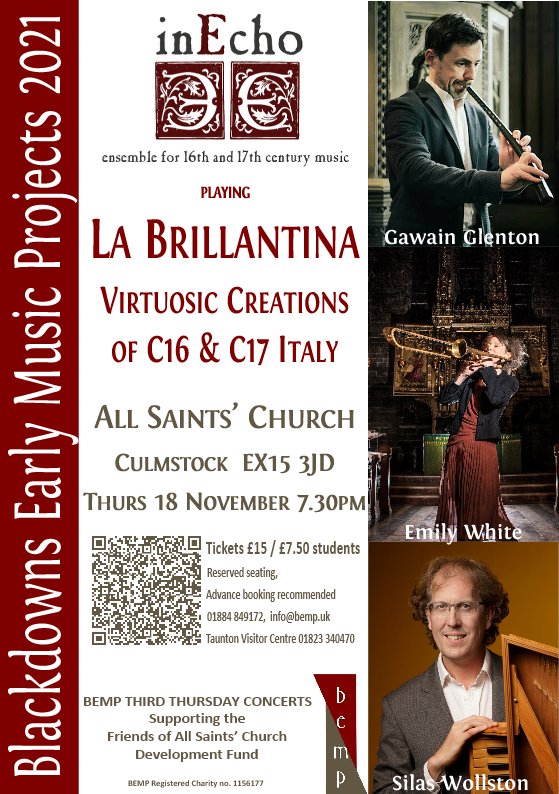 In Echo’s programme, La Brillantina, is built on the fantastic legacy of Adrian Willaert who arrived in Venice from the Netherlands in 1527. The remaining decades of that century were arguably the most vibrant of Italy’s musical history, thanks to the compositions and virtuosic performances of people like Giovanni Bassano, Girolamo Dalla Casa, Gioseffo Guami, Andrea Gabrieli and Claudio Merulo.
In Echo’s recording of this music is about to be released, so you will be among the first to hear it live!  Here is a sneak preview

Formed by cornetto player Gawain Glenton, In Echo is a diverse ensemble that explores the rich repertoire of the 16th and 17th centuries. Three members of the group, Gawain, Emily White and Silas Wollston will be playing on November 18th. Specialising in renaissance and baroque music, the ensemble also commissions and performs new music for old instruments.

“It is natural to believe that people have always experienced the world much as we do today, but the truth is different. Fundamental attitudes – such as man’s place in the universe, the nature of society and everyday life – are not constant. They evolve and alter over time. The same is true with music. For instance, musical training in the 16th and 17th centuries was very different from the training classical musicians receive today, with the result that musicians then developed a different understanding of music from its most fundamental aspects.
We cannot click our fingers and ‘become’ musicians of the 16th century, but we can learn the things they learned, and explore the skills we know they developed. The aim is not academic, but to arrive at performances that connect more with modern audiences – just as fully historical productions of Shakespeare plays can be more accessible to people in the 21st century, not less.”