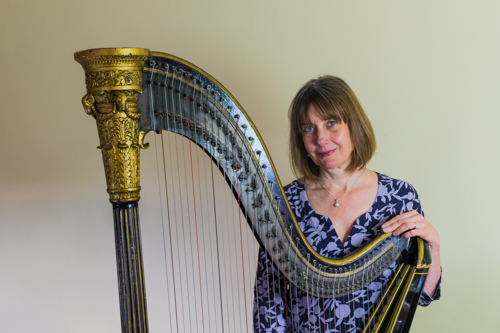 Frances Kelly has enjoyed a wide-ranging career reflecting her broad interest in music from the middle ages to the present day. Teaching has been a much loved and important part of her life, and Frances holds posts at the Royal Academy of Music and at Trinity Laban Conservatoire of Music and Dance as well as at the Bedales Schools in Petersfield.

Frances spent her early professional years working with London orchestras, the ballet companies and especially in chamber music groups (including the Nash Ensemble) with whom she performed much contemporary music. Falling in love with the music of Monteverdi, she was one of the first harpists to commission the building of baroque harps and has become a leading exponent of early harps.

In great demand as a continuo player, Frances has for two decades been harpist with the Choir and Orchestra of the Sixteen, and she has worked regularly with the Orchestra of the Age of Enlightenment, with whom she performed Mozart’s Concerto for Flute and Harp in 2016 at the Royal Festival Hall, under the baton of Sir Roger Norrington. She has also performed, broadcast and recorded with many other distinguished early music ensembles and most of the major UK opera companies.

Over the years Frances has also enjoyed many varied chamber music partnerships with Catherine King (mezzo soprano), David Miller (lute), Judith Treggor (flute), Gustav Clarkson (viola), Anneke Scott (horn), and Sue Addison (trombone). Her numerous recordings include a solo Harp Collection, Mozart’s Flute and Harp Concerto, Handel’s Harp Concerto, many chamber music recordings and several recordings of Britten’s A Ceremony of Carols, most recently with the Choir of St Johns College Cambridge, and with the Choir of Winchester Cathedral. Her work has taken her throughout Europe and to the USA, Mexico, China and Japan, and she was honoured to be invited to join the Handel and Haydn Society for performances in Boston and in Tanglewood, USA.

“Frances Kelly is an accomplished lecturer as well as an impressive musician. She sees beyond the notes and creates instinctively, and apparently effortlessly, what the composer had in mind.”

“This was a very special concert. Frances Kelly showed fine musicianship and gave us so many insights into the music for the harp”.

“It was wonderful to hear so many different instruments!”