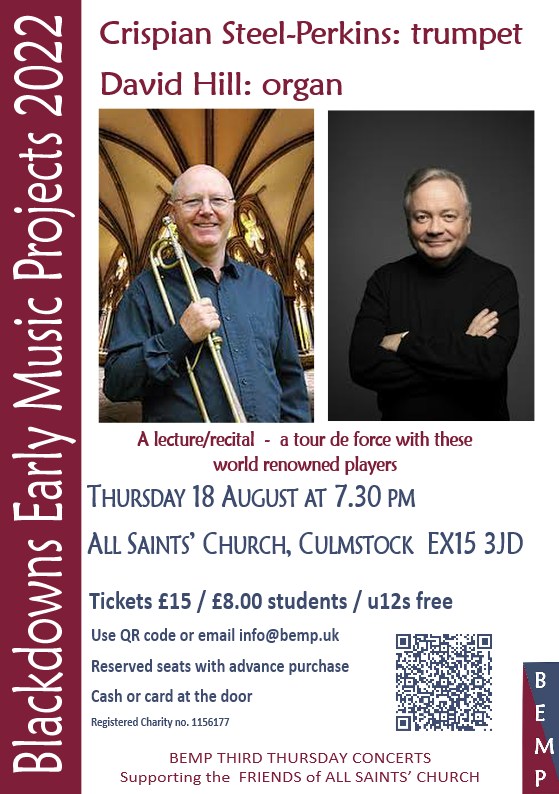 Crispian Steele-Perkins has received widespread critical acclaim as a trumpet player with a purity of tone and artistic subtlety second to none. He collects and restores antique trumpets upon which he has performed and recorded with The Academy of Ancient Music, The Kings Consort and The English Baroque Soloists. Appropriately, he plays the theme tune to one of the BBC’s longest-running and most popular TV programmes, the Antiques Roadshow, among many other screen credits, including most of the Star Wars series!  We look forward to meeting him, with his many instruments, as much for his playing as his renowned enthusiasm and wit.
David Hill is a world renowned conductor and organist, a Fellow of the Royal College of Organists at the age of just 17. His many posts have included Sub-Organist at Durham Cathedral, Master of the Music at Winchester Cathedral (1987-2002), Master of the Music at Westminster Cathedral, Associate Conductor and then Artistic Director of the Philharmonia Chorus (1986-1997), Director of Music at John’s College, Cambridge (2003-2007). He was appointed 9th Musical Director of The BBC Singers, is Musical Director of The Bach Choir and directs several other prestigious organisations here and abroad. As an organist, David Hill has given recitals in most of the major venues in the UK and has toured extensively abroad.  Culmstock Church’s organ is in for a treat!