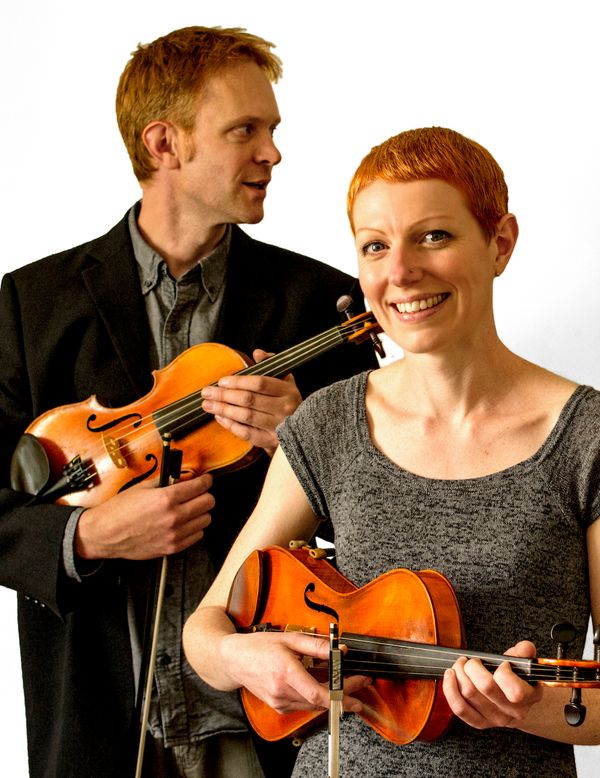 The joyful combination of English fiddle partnership Nick Wyke and Becki
Driscoll welcomes you into their family from the first note. This is a masterclass
in the art and mystery of connection; two fiddles and two voices working in
confidence and synergy to create something far greater than the sum of its
parts. Nick and Becki’s refined arrangements feature intricate subtleties that
build to driving rhythms, stunning harmonies and dramatic crescendos.
These compositions are infused with shared stories, songs and tunes from
England’s west country and beyond – and it can all start from just one simple
riff. Their new album ‘Cold Light’ weaves together ancient melodies, traditional
dance tunes and newly-written songs. This is the very essence of folk music;
allowing the past to inspire the future.
The duo’s own story began on a six-month busking and hitchhiking adventure.
A few years and two children later, their music has matured to bear the
unmistakable hallmarks of a partnership grounded in the confidence that only
mutual love, trust and stability can bring. Audiences instinctively feel this, and
warm to Nick and Becki’s assured stage presence and entertaining patter.
This is music for the heart, the mind and the soul, and an evening in Nick and
Becki’s company will remind you of the importance of each.