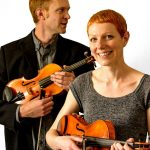 So looking forward to hearing these two next Thursday, music starts with the folk who make it.  Some tickets still available from TicketSource .  Please call 01884 849172 if apparently sold out, we might be able to help you… social distancing still applies however we will be able to admit a few more !

We are delighted to welcome Frances to this series, she will talk about the development of the harp and perform music from the harp’s extensive repertoire on a number of different instruments. Look forward to  medieval , early Italian, Spanish and wirestrung Irish harp music followed by baroque composers such as Handel, Bach and others.

We just can’t wait for Thursday 20th May!  Thank you to those who have already booked for some – or even ALL of the series.

If you have not yet booked, you might just be lucky enough to get the last of a handful of socially distanced seats for Newe Vialles aptly titled programme ‘Goode Again’

There are seven more events in the series to enjoy, one every Third Thursday of the month in All Saints’ Church, Culmstock

The silence of the last year is coming to an end; whatever anyone says, there is absolutely no substitute for real live music, whether you are a performer or enjoy being there to listen.

BEMP is delighted that the Third Thursday recital series can now get underway, with an event on the Third Thursday of every month from May 20th throughout 2021.  There is a wide range of music to choose from, some really early,  some of it new music  played on old instruments, all of it in the lovely acoustic of All Saints’ Church, Culmstock.  This is a special performance space and in partnership with The Friends of All Saints’ the series is presented to enable our professional musician friends to play for you and to assist the Church Development fund toward improving  facilities at the church.

Look out for our new series of Third Thursday concerts in 2021.  Starting as soon as Covid restrictions permit (April?) and  in partnership with the Friends of All Saints’ Church in Culmstock, we will be offering a concert/recital every third Thursday of the month. Top flight performers to anticipate this year include Steven Devine & Kate Semmens, Newe Vialles, Pandora’s Box, In Echo and more.

In keeping with many other organisations, it is with great regret that we must announce that this course will not be taking place as previously advertised, as a result of situation we all now face with the advance of Covid-19.

Please check back for further information in due course.

Following the last two years’ gatherings of viol players at Cadbury House and elsewhere in Culmstock, we are this year running a residential course open to viol players and lutenists, focusing on English music of the 16th and 17th centuries.  The tutors for viol, consort and continuo will be Caroline Ritchie and Henrik Persson;  we are delighted that Lynda Sayce will join as a tutor for lute, theorbo and ensembles.  Lots to look forward to, with a focus on English repertoire from the 16th and 17th centuries. All information here and reservations are open now!

So, we are off again, as if Grand Baroque I, II and III in 2013, 2015 and 2017 weren’t enough!  Here comes Grand Baroque IV, another foray into C17 extravagance on a scale rarely performed today. There is one important difference, however! Instead of dragging you away from the beach or BBQ over a sunny August Bank Holiday weekend, we are offering GBIV at 7.30 pm on Friday November 29th in Exeter Cathedral.

The programme will feature the choral work of two composers who were rewarded for their prodigious compositional and performing ability by earning  the patronage of wealthy courts,   Giovanni Felice Sances (1600-1679) in Vienna at the Habsburg court of Ferdinand III and Heinrich Ignatz Franz von Biber (1644-1704) in Salzburg, working for Archbishop Maximillian Gandolf.

We  commissioned the first transcription of Sances’ Missa Sancta Maria Magdalenae in 2004 and it received its first modern performance in Taunton that year.  With a second SW performance of the Mass (and probably the first in the UK) we shall feature Biber’s  Requiem à 15 –  he had the musicians and space available to him in Salzburg to invent works of extraordinary harmony and rhythm: now it’s time to share  them with you!

More information here …. or go straight to Ticketsource for tickets*

*Early Birds buying before August 31st will earn an automatic 10% discount at checkout if buying 4 or more tickets in one transaction.

Gawain Glenton’s debut as guest MD with Blackdowns Early Music Projects started the Spring Festival with music of the Habsburg courts of Vienna.  Agreed by all involved, performers and audience alike, to be a hugely enjoyable programme, greatly enhanced by the installation of dragonflies in the Church!

Huge thanks to Gawain, to Emily White and her sackbut and violin students and to Martin Perkins and his ever versatile keyboards.

Tickets now selling fast for the remaining three events… click here for information or go straight to TicketSource for tickets.