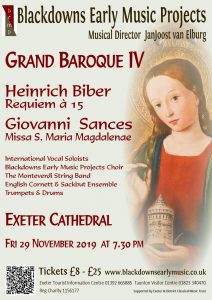 So, we are off again, as if Grand Baroque I, II and III in 2013, 2015 and 2017 weren’t enough!  Here comes Grand Baroque IV, another foray into C17 extravagance on a scale rarely performed today. There is one important difference, however! Instead of dragging you away from the beach or BBQ over a sunny August Bank Holiday weekend, we are offering GBIV at 7.30 pm on Friday November 29th in Exeter Cathedral.

The programme will feature the choral work of two composers who were rewarded for their prodigious compositional and performing ability by earning  the patronage of wealthy courts,   Giovanni Felice Sances (1600-1679) in Vienna at the Habsburg court of Ferdinand III and Heinrich Ignatz Franz von Biber (1644-1704) in Salzburg, working for Archbishop Maximillian Gandolf.

We  commissioned the first transcription of Sances’ Missa Sancta Maria Magdalenae in 2004 and it received its first modern performance in Taunton that year.  With a second SW performance of the Mass (and probably the first in the UK) we shall feature Biber’s  Requiem à 15 –  he had the musicians and space available to him in Salzburg to invent works of extraordinary harmony and rhythm: now it’s time to share  them with you!

More information here …. or go straight to Ticketsource for tickets*

*Early Birds buying before August 31st will earn an automatic 10% discount at checkout if buying 4 or more tickets in one transaction.